Decor, discipline and working environment are majorly the most important key factors that make up an organization. These key factors not only affect the efficiency but also the harmony which has been already established. If disturbed by any reason the output, in turn, is affected badly.

People are not the same everywhere you go. Some are hard to manage while others require a little push up to get started. In offices, many different personalities are working together towards achieving a specific goal. At places, the employer is not good while others have difficult employees to work with. Many a time problem arise between the employee and the employer, managing these differences is of much importance.

Problems, like being too much absent at work or being lazy or even rude to others, are issues which are often tackled. These problems affect the working environment of any organization. Amongst these is an issue of an employee being talkative. This issue not only affects the employee’s performance himself but also others performance as well.

Being very rude at the first sight is not sensible enough. You need to talk to the employee. The best way to communicate the employee of his current behavior is through a warning letter.

Warning letters are issued to employees when their behavior or any other action not only affects their performance but also the overall output produced. For Instance, an employee is being too much talkative at workplace create problems. He is not alone, he involves others in it by his talking. The supervisor is constantly observing him/her and maybe waiting that s/he may stop. But when it does not, a warning letter by the supervisor or the manager is verily issued in the name of the employee.

In the letter, the supervisor addresses the employee of his talkative nature. He moves forward by referencing events which have progressed towards his/her talkative nature. It is told to the employee that his talkativeness not only disrupts him from working but also others working with him. Which in turn leads to lesser output. Your unnecessary talk is not acceptable here. It is an office where you come to work and not talk.

Not verbally, but in writing the employee is warned of refraining from his habit thus abiding by the company rules and regulations as this is not an acceptable behavior. This letter becomes a part of the employee’s file which can be possibly reviewed when considering for promotions.

If the employee does not restrain himself from this behavior then strict action can be taken. 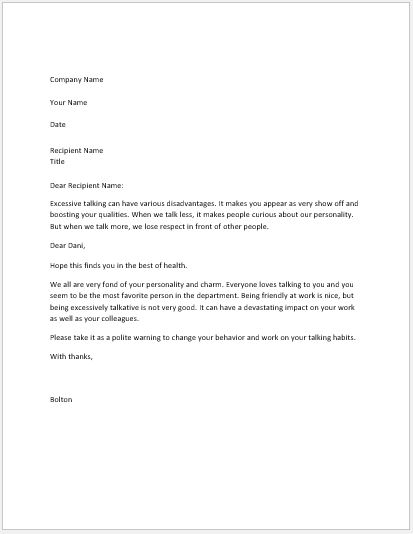